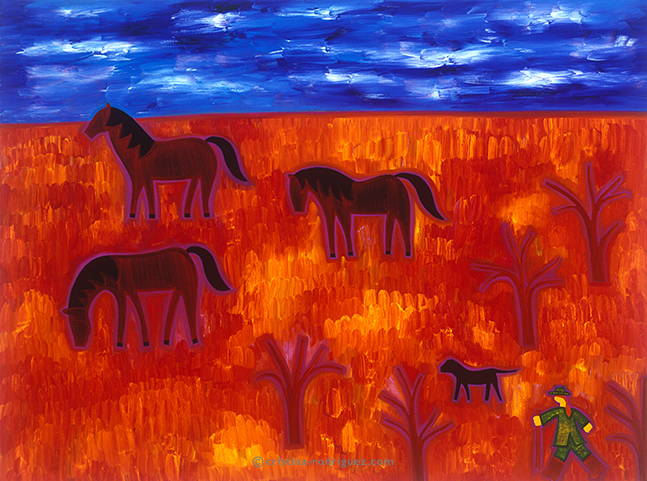 Title: Those days are gone

Catalogue Essay by Luke Elwes:
Step into Cristina Rodriguez' studio and you sense both a warm embrace and a defiant gesture, an assertion that a better world exists than the cold grey wasteland beneath the concrete and noise of Westway that you have just left behind. In this world made of magic and stories you step all at once into a celebration, where colours sing and shapes dance, where animals walk, children caper and fish leap from painted waters. Sweet moments recorded with an open heart and the delight of a child, but a sweetness sharpened by the artist¹s encounters with suffering and death in her native Colombia. Just as bright flowers are planted in the face of loss, so her pictures affirm life in the face of the world¹s destructive urges.
Travelling with her sketch book to Namibia, South Africa, Peru, and Patagonia, seeking to be alone, she looks closely at what so many travellers pass by in their urgency to consume - the pattern on a dress, the stately amble of a Peruvian ox, and the raw sun baked earth and turquoise water from which such patterns and images emerge. Familiar sights return with emblematic power: majestic moons, red suns, rosy mountain tops. Her journeys express a desire akin to Rousseau's to make manifest the imaginary world that resides close to the real, and to give back to the viewer what a shortage of time so often denies us. Nor is it only in the exotic that she finds sustenance for the spirit - for it is present too in the local park and the city street, where a homeless figure surrounded by birds is bathed in brilliant yellow, and a giant whale passes beneath the solemn facade of the Palace of Westminster.
Some of the recent work revives those places with a lingering significance in her life - a playful retelling of remembered scenes in Venice or Paris, or of an autumnal walk amongst wild horses in Somerset. Other pictures push deeper into imaginary country, as with the female figure who rises from the cast off skin of a snake. Elsewhere she rises up a long vertical canvas in a similarly transformative quest, climbing out of a secret Eden via a winding umbilical path and up beyond the solitary white cloud towards an eagle perched on a mountain peak. If there is reference here to the stories of Isabelle Allende, there is also something of the lucid colour and visionary imaginings of Ken Kiff, although they remain distinctly her own, fashioned as they are from her heritage and her insistent message of feminine healing.
Cristina Rodriguez' new paintings speak of a fierce and tender love, the mother¹s for a child and the traveller¹s for a fragile world. And, of course they make you smile.
View the Catalogue